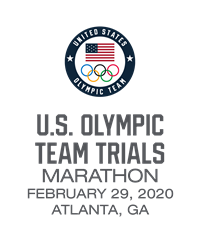 Atlanta, GA. – The pace quickens as the races near.  Here In Atlanta, the strides along the sidewalks around Centennial Park are long and flowing, the conversations more urgent as there are fewer than 24 hours left till the start of the 2020 U.S. Olympic Team Trials Marathon.

I’ve been looking at the last three marathon trials – 2008, 2012, and 2016. Different courses, different weather conditions, different composition of fields, etc.  And yet there seems to be some relative similarities.

In the heat of Los Angeles 2016, the men went out conservatively as one would expect. The first sub-5:00 wasn’t run until mile 16 as there were still 15 guys grouped together at 15 miles. One mile later Tyler Pennell ran a 4:56 followed by a 4:50 and that blew the pack to smithereens with Galen Rupp and Meb Keflezighi joining Pennell our front with five guys in a chase pack behind.

Rupp finally broke free of Meb at 23 miles with Jared Ward moving through to nab the third spot on the team.

The women’s race in LA was more even paced, opening in 5:40s (2:28 pace) with an eight woman pack gathering quickly.  But by 10 miles, eventual winner Amy Cragg and training partner Shalane Flanagan separated with NAZ Elite’s Kellyn Taylor.  2008 runner-up Des Linden lingered 35 seconds back at half way. The leaders split in 1:14:29.

From there, it was a two-woman race in VaporFlys until 22 miles when Amy began to open up on an overheating Shalane. By this time, Amy had 51 seconds on Des who finally caught and passed a fading Shalane in the 25th mile.

The lesson, perhaps, is that if the pace goes out conservatively, the action tends to begin around 13 miles. But if the fields go out with some pace (Men 2012 Houston) then the break tends to open around 15 miles. So let’s look at 15 miles on the Atlanta course as a potentially telling point of action.

In Atlanta, the course has almost no flat spots and some rather daunting climbs. It is mainly three 8-mile loops with another smaller loop to complete the distance.

So at the critical juncture of 15 miles, there’s a serious climb that could be a decisive moment.  Once over the top, it’s back downhill to 19.3 miles where the course turns around at Peachtree Circle and comes back up those same hills.  No momentum to call on here. Athletes will need power to stay in the game. The team could well be determined there.

After 23, the course branches off from the 8-mile loop the runners have run three times.  24 through 25 isn’t stern, but there is another bulge from 25 to 26 before downhill for the last 385 yards.

With cooler conditions forecast, and wind, you’d think the pace might be solid if not fast from the gun. People I’ve talked to believe Atlanta’s roller coaster course will add three minutes of time so 2:09 guys are probably 2:12 types and 2:23 women are more like 2:26ers.

Until Tanzania’s Filbert Bayi flipped the script at the 1974 Commonwealth Games 1500 meter final in Christchurch, New Zealand – setting the world record by going out in the first half like everyone before him had previously closed the last quarter – foot races adhered to an old Chinese proverb tao guang, yang hui, bide your time, build your capabilities.

That strategy, in time, would overturn the old order, bring you to the lead and exact victory. Some observers believe it is also the current political philosophy of modern China, but that is another story.

One of The storylines for the 2020 US Olympic marathon trials in Atlanta is whether ultra runner Jim Walmsley has any chance to make the team. The consensus belief is that he doesn’t, as his focus since graduating from the Air Force Academy in 2012 has been at ultra marathon distances where he has been ultra successful.

In fact, he’s never run a competitive marathon as such, only qualifying for the Trials via the half marathon route. And yet there are stories from the New York Times, Sports Illustrated and other outlets that no other 63-minute half marathoner would receive.  But that is a reflection of the success Walmsley has had in his ultra career and how starved the American fans are for an underdog hero.

To have any chance at all, one would think, Walmsley will have to take a big risk to achieve the big reward. If he runs a standard race, one assumes he can’t possibly compete with the top pro marathoners. But if he can somehow make them respond to a race plan that he dictates, who knows?

That means one thing, taking off early, building up a lead, and applying pressure so that others make mistakes.

We saw Meb Keflezighi win the 2014 Boston Marathon by taking a big lead against much faster opponents. By the time they realized he was out there, it was too late to run him down. We saw Constantina Dita win the Women’s Olympic Marathon gold medal in Beijing 2008 with an early break that was never covered.

It can happen. But is Walmsley capable of a front running 2:11 on the ultra hilly Atlanta course?

When we covered the HOKA 100 kilometer world record attempt last year in Sacramento, Jim averaged 5:48 per mile pace through 50 miles establishing a new world record for that distance (4:50:08). But does that kind of strength translate to half the distance at or near sub 5:00/pace?

2016 Olympians Galen Rupp and Jared Ward both ran controlled 61-minute half marathons in prep races for the Trials. Jim ran 62 on a slightly short course in Phoenix that translates to 63 minute half.  That’s a solid PR performance. But racing Rupp, Ward, Leonard Korir, Scott Fauble and the other pure marathon favorites will require some kind of flyer to earn a spot on the 2020 team. Who better than an Air Force Academy grad to take that sort of wing? Why else would he even go to Atlanta if not to see if it could fly?

That in mind, and with strong veterans making up both fields, look for the usual suspects to punch their tickets to Tokyo (or wherever the Olympic Marathons will be run).