In response to December 13th’s blog, TEAM USA ARIZONA Receives Grant from 2011 Woodrow Wilson Bridge Half Marathon, I received the following e-mail.  Rather than place it in the comments section, I thought it deserved a post of its own.  While I have railed quite consistently on this blog about the need to re-address the sporting aspect of running in light of the fun-run tsunami which has swept over the hinterlands in recent years – not in the sense that one should be sacrificed at the expense of the other, but in a win-win way – race directors like Arizona’s John Reich and Steve Taggert, along with Maryland’s Steve Nearman have actually begun putting words into action.  This then, from John Reich:

Dear Mr. Reavis,
I have enjoyed your articles on something needing to be done to save/promote competitive distance running.  I am writing to let you know I completely agree with you, and let you know what our club is doing to try to help.
Last year we (The Bandidos, Scottsdale, AZ) started the Southwest Spine and Sports Mountain to Fountain 15K (www.bandidos15k.com) of which I am the race director.  Our goal from the beginning was to put on a race by runners for runners.  We want this to be the most competitive race in AZ not the largest race in AZ.  We offered a $10,000 prize purse for open and masters athletes.  The open money was U.S. only and the masters money was open to everyone.  We want to help developing U.S. athletes not be protectionists so the U.S. masters runners have to compete with the world.  With RNR Arizona lowering their prize money in 2011 we became the biggest prize money race in Arizona in our first year.
In addition to prize money for elites and comped entries for elites as well as sub-elites, we offered great age group awards and intentionally kept our entry fees low.  Our race is all volunteer and not for profit so we can direct all our income into putting on a great race and promoting distance running.  This year we had a net income of just over $2,000 which we gave out as grants to support distance running in AZ.  We had 12 applicants for the grants and awarded four $500 grants.  Two went to elite athletes training in Flagstaff, one went to a high school cross country program and one went to a middle school club cross country program.  Our web site is being updated this week, and when it is done there will be a profile of each of the grant winners so our participants know who they helped in 2011.
While all this promotion of running is fun for our club members we also wanted to make the event fun for non running geeks so we paired with a local brewery and created a team division where the prize was the weight of your heaviest team member in beer.  Below you can see the weighing of the women’s masters team winner. 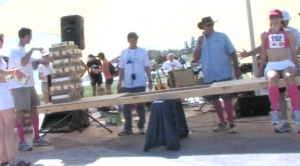 Putting on a race was a lot of work, but it is not rocket science.  It seems like if 20 clubs across the country decided to do something similar to what we started this year their would all of the sudden be some options for young pros.
Thanks for sounding the alarm.
John Reich, Race Director
Southwest Spine and Sports Mountain to Fountain 15K
www.bandidos15k.com
Thank you, John, for your reponse and your actions.  As we both can see, what we are talking about is a numbers game.  With thousands of races and millions of runners there is no reason that a unified, yet low-level, across-the-board investment by the many couldn’t have a major impact on the quality of the sport, and therein create a platform to appeal to youngsters who look to the world of sports for heroes and role models to emulate.  Here’s hoping your example will spur others to join the movement.
END

2 thoughts on “RESPONDING TO THE CALL”