So far in this first week of the 2016 Rio Olympics they’ve raised the red, white and blue of the American flag more than any other. But by the end of the Games it may well be that the red flag of WHAT!??! could flutter most high and most often.

It’s getting harder and harder trying to keep track of the Olympic eye rolls. The minute you try to wrap your head around one thing another one pops up to replace it. Just when the focus was on the Kenyan official attempting to peddle advanced warnings on drug testing, we learn he got a row mate on the flight back to Nairobi when another Kenyan coach got booted for taking a random drug test under the name of 800 meter man Ferguson Rotich. 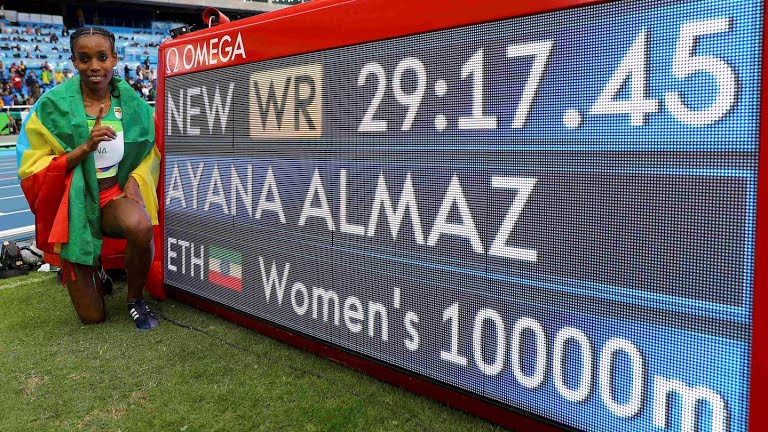 But that was all off the field, along with the dirty green water in the Olympic diving pool. Now we’ve got Almaz Ayana of Ethiopia smashing the women’s world record in the 10,000 meters by 14 seconds (29:17.45) on day one in the Olympic stadium without as much as a furrowed brow or reliance on a turtle-based concoction of any sort.

The 10,000 world record, we recall, was set in 1993 by the Chinese runner Wang Junxia, a member of Coach Ma Junren’s Army who claimed his runners were fueled by turtle blood and caterpillar fungus until Wang later copped to being doped.

John Sebastian of the Lovin’ Spoonful asked in the bright summer of 1965, “Do You Believe in Magic?” Well, actually I did then, but I don’t now. And how could you?

It is the sad state of our most cynical world (THE NEW AGE OF GUILT). There is no automatic, wide-eyed belief in the transcendent anymore. And that is a shame for Ms. Ayana and any others who may be falsely suspected. But we have been taught too well over too long a period of time. We have been burned too often. Approximating Breaker Morant, “this is what comes of empire building.” Or, in this case, from IOC empire saving, for this is the bitter harvest of the IOC’s own fallow field plantings.

The economy collapsed in 2008, because for years we were told by financial predators “we can save you money”, “everyone can afford a house”.  It wasn’t true, and without proper oversight bundled sub-prime loans crashed the economy. So when the promises come now, it’s caveat emptor.

One of the beauties of athletics is that it’s a sport of effort, rather than skill. It is a very close ordered sport where differences are paper-thin at the world-class level, because everyone does variations of the same training.  Vivian Cheruiyot and Tirunesh Dibaba are historic figures in women’s distance running. Today, they were made to look ordinary until you looked at their times in silver and bronze positions behind Ms. Ayana.

Training harder than everybody else is one thing, but destroying a world-class field and smashing a drugged-up world record without the semblance of effort or fatigue is a mortgage rate that won’t hold.

So when will the next red flag be raised?  I know one thing, its anthem will be played in a decidedly minor chord.

22 thoughts on “DO YOU BELIEVE IN MAGIC?”