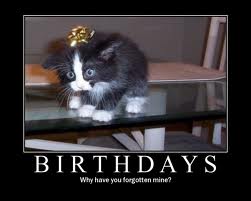 All birthdays are wonderful in that we even have one.  The odds against being conceived, much less born, are so great — scientists calculate the probability at about one in 400 trillion (4×1014) — that we must all begin with a heartfelt nod to the old Rib-taker.  But from a kid’s vantage point — and aren’t we all kids when it comes to birthdays? — there are good birth dates and bad birth dates.  Believe me, I’ve lived through enough January 2nds to know first-hand what a stinker it is.  And now I have proof!

According to a study by Amitabh Chandra, Harvard University, January 2nd ranks 362nd out of 365 on the popular — unpopular birthday scale, reflecting the number of people who share the same birthday. Only December 24th, January 1st, and December 25th rank lower.

My older sister Teresa’s January 10th birthday is only marginally better than mine at 349th.  But our younger brother Marek’s June 18th date, by comparison, is a relative beauty at 126.   Turns out September 16th is #1, as is the whole month of September, which contains the top 11 most popular birth dates.  This means December is the most fecund month, and notwithstanding that old Pat Boone classic April Love, there evidently ain’t a lot of lovin’ going on in the springtime compared with the cold snugglin’ presently at hand. Thus January is the suckiest birth month of the twelve with 22 of its dates ranking in the 300s, and none higher than 240.

Now it goes without saying that Jesus has the most celebrated birthday of all time. Yet interestingly December 25th is the least popular date of birth for everyone else.  Hard to go head-to-head with J.C. in anything and come out on top, I guess, and that’s the real problem in having a holiday-proximate birth.  By the time the family has gone through Thanksgiving, Christmas, and New Year’s, they are tired, broke, and cranky.  Come January 2nd they’re also most likely still hung-over, so nobody wants another effin’ celebration.

“Oh, and this is for Christmas and your birthday,” the folks would say as I tore open my presents under the tree.

Of course, they were just trying to slip the slight by me, but I noticed there wasn’t an extra present involved in their little mash-up.  So I took the whole thing as a jip.  Come mid-June my brother would be feted like the Sultan of Brunei since there wasn’t any other celebration going on within shouting distance of his birth date.  Made me feel a little like Washington and Lincoln (without the historical significance or talent).

Those two used to have independent national birthday celebrations until they got lumped into President’s Day with every other Buchanan, Polk, and Harrison who didn’t deserve to have anything about them remembered, much less their birthdays. All President’s Day did was water down the celebration for the two monument holders and ramp up the savings on mattress sales.

The worst part of it was I wasn’t supposed to be born in early January. Mom was mighty sick during my pregnancy, and I had to make an early stage call two and a half months early.  It was a close call for us both, and we worked hard to come out of it intact (mostly).  I was supposed to be a March 15th guy.  And despite Will Shakespeare’s warning about the Ides of March, while no September valued date, March 15th still ranks 264th, a good 98 places better than January 2nd.  I woulda got something!

But here’s the kicker.  My mom was born in Poland, a very Catholic country.  So one year when we were back to visit the family in June. I woke up on the 13th to find a very nice collection of gifts awaiting me.

“What’s this for,” I wondered.

“It is your names-day,” said my cousin Ignacy.

“Yes, “the celebration for St. Anthony of Padua, your namesake.”

“Wait a minute. You mean you get presents on you namesday rather than your your birthday in Poland?”

“Hey, Mom?  Why am I finding this out now in my forties?”

“Shut up, and eat your cake. You’re lucky I named you after a saint in the first place. You could just as easily have been a Nobby. Then what?”

2 thoughts on “NOT ALL BIRTH DATES ARE EQUAL”