Honolulu, Hawaii — It’s a push-me, pull-you kind of world. On one hand the demands of elite long distance running remain constant, requiring an all but monastic focus on the rigors of training.  But on the other hand the demands of the marketplace in which running finds itself in a hurly-burly competition against the media-savvy marketers of the PGA, NBA, and numerous other sports, require athletes to step out of their monk-like lairs to promote and market themselves and their sport like true professionals.

This week in Honolulu we are seeing evidence that even one of the most cloistered of athletes by nature, marathon world record holder Patrick Makau of Kenya, is making attempts to reconcile these competing demands of his sport.  So even as he prepares for an important tune up for the April 21st Virgin London Marathon in tomorrow’s second annual Hapalua, Hawaii’s Half-Marathon, he spent yesterday and this morning tending to his branding and promotion efforts by appearing at a local high school, conducting a live Facebook Q & A with fans, and joining local runners in a morning fun run hosted by the Hapalua Half. 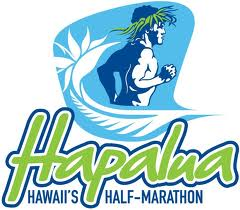 “When you have someone like Patrick Makau at your event,” explained Honolulu Marathon President Jim Barahal, organizer of The Hapalua, “when you invest in an athlete of that caliber, it’s important that he not be seen as separate.  So you have him interact with the everyday runners as much as you can to close the gap between them. Nowadays it’s the opposite of the loneliness of the long distance runner.  Today, running is a highly social sport. So it’s important to bring the pros to everyone else so they become part of the community, which itself is a world-wide, and no longer fragmented into separate local communities.”

Yesterday afternoon Makau made an appearance at Damien Memorial High School where he addressed Brother Bernie Samp’s track team, answering questions and signing autographs for wide-eyed young fans for whom the presence of the world record holder held special significance.

After that it was a drive through the bumper-to-bumper crunch of Honolulu rush hour to the Hawaii Convention Center for an hour-long Facebook Q&A with fans from all over the world.  Finally, this morning Makau, along with six-time Honolulu Marathon champion Jimmy Muindi and their training partner Nicholas Manza joined a group of local runners for a casual spin around Kapiolani Park after which more pictures, autographs and swag handouts commenced.

Paradoxically, while competition calls for as great a separation as possible, before and after the race the need is to close the gap so everyone can share the experience on equal footing.  While not a natural tendency for the generally modest, rurally-raised Kenyan athletes, if running ever hopes to lift itself to the next level, the new mantra must be: build your brand, elevate your sport, so everyone wins.END

7 thoughts on “THE START OF BRANDING AND PROMOTION”