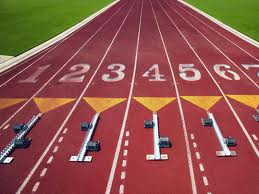 The lines in racing are evident and precise. At tomorrow’s Diamond League Adidas Grand Prix in New York City lines will define the arc of competition while designating starts and finishes.  If only life could be so simply striped.

Events around the globe have been effected by the bombings at the Boston Marathon this past April 15th.  And there is little doubt that these next ten months will be daunting for the Boston Athletic Association as they determine where to draw their own lines for Patriot’s Day 2014.

Yesterday, May 23rd, in his War on Terror policy re-set speech at the National Defense University in Virginia, President Obama brought up Boston as he enunciated the qualities which define America and which require, in his words, “efforts to refine, and ultimately repeal, the AUMF’s mandate.” (Authorization for Use of Military Force Against Terrorists)

“I think of the runner planning to do the 2014 Boston Marathon who said, ‘Next year you’re going to have more people than ever’,” said Mr. Obama, declaring no war can go on indefinitely. “Determination is not something to be messed with. That’s who the American people are, determined, and not to be messed with.”

If that is true of Americans in general, it is even more so the definition of marathoners, regardless of their country of origin.  Events throughout the running world have pledged support for the One Fund Boston, and there have already been calls for the BAA to open up the 2014 Boston Marathon like they did for the 100th anniversary race in 1996 when over 38,000 runners were allowed to participate.  And the townspeople of Hopkinton, Massachusetts, the sleepy bedroom community which serves as the starting area for the marathon, have come to an early understanding that 2014 will be a special year regardless of the Day of the Locusts their town might be turned into.

This past weekend I was in Cleveland for the 36th Rite Aid Cleveland Marathon & 10K.  22,000 runners came together to celebrate fitness, pledge allegiance to the fallen at Boston, and salute the freedom that America represents.  But what I also witnessed was a show of security that gave one both pause and comfort as the two forces of freedom and security sought equilibrium in these contentious days of pride and fear.

Cuyahoga County Sheriff Frank Bova told WKYC-TV3 that this year they had a new “impact unit” in the crowd for the marathon, a unit made up of 12 deputies who were ready for a large-scale emergency response. And at the weekend expo at Cleveland’s International Exposition Center, a new bag policy was implemented that had officers checking every purse and backpack that came into the building, and required all backpacks to be checked before entering the expo area. Is widespread TSA-screening the world of the future in the land of the free?

The week after Boston I was in London for their marathon, and while their response was robust in light of the Boston bombings, a 40% increase in security, what was publicly visible was only the minute of silence before the start, a suitably British understatement.  Yet in Cleveland the appearance of security was highly visible, not just in the form of regular police, but in the tactically outfitted military-like special forces that patrolled the start finish area around FirstEnergy Stadium, home to the Cleveland Browns.

There are thousands of road races around the country each year.  It is still too early to determine if what happened in Boston will fundamentally change the nature of these freedom festivals, or if our public response might, in a paradoxical way, make a case that reinforces the actions of ones like the brothers Tsarnaev in Boston.

“See how we can make them jump?”

Is there a case to be made to ignore the grand gesture as a means to reduce the likelihood of similar return? Where is that line between freedom and security? By building up our response do we reinforce the threat?

Therein lies the great challenge.  Though the simple act of running strips us of the social, political, and economic encumbrances that may separate us, and therefore grants those who in engage in the act an insight into our commonality, not every man is a runner.  Nor does every man seek to sew with the common thread.  Some men revel in the otherness of their plight, even as we runners of the pre-Boom era once did when very few undertook distance against time upon foot.

There is no doubt that an ever-increasing world population drawn closer closer by technological advances while competing for limited resources will, like tectonic plates beneath the earth’s crust, generate a correspondingly greater friction.  But on top of that we live in an era when the historical ends of colonialism, imperialism, and the Cold War have set free once-clamped down populations.  And any such release comes with deep-seeded feelings of frustration and bitter self-righteousness that can lead to an indiscriminate lashing out.  Just as beauty is in the eye of the beholder, so, too are envy, comeuppance and retribution.

There is a fine distinction between the role of a super-power and becoming the symbol which defines historical arcs, as our own Don’t Tread on Me beginning was a retreat away from exactly those same restrictive forces.

Just as the New York Road Runners’ best intentions were lost in the wake of Hurricane Sandy when the New York City Marathon became the symbol for the fear and frustrations released by the storm, so too is America’s righteous self-defense – after all, who attacked whom on 9/11? – too often misread even as our size, high-tech weapons and mission over-reach make us more likely to bear the brunt of a changing world’s frustration and calumny.  Thus, while President Obama defended the use of drones in the ongoing war on Al Qaeda, he also reminded us, “we must define the nature and scope of this struggle or else it will define us.”

Running has been called the great democratizer, as all men are given an equal opportunity at the start and only separated by talent, training, and racing desire by the finish.  Where we draw the lines between one another and our guests at our races may well be a leading indicator of how we respond beyond our shores, as well.

5 thoughts on “THE LINE”