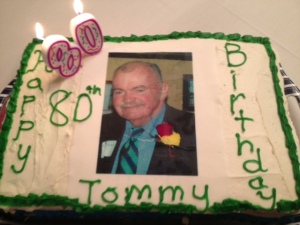 Falmouth, Mass. — 150 to 200 of Tommy Leonard’s best friends surprised him with an early 80th birthday party last night at the Sea Crest Beach Hotel as the 41st New Balance Falmouth Road Race weekend got under way on old Cape Cod.  For those too young to know, it was Tommy who founded the Falmouth Road Race in 1973 after watching Frank Shorter win the Olympic Marathon in Munich 1972.

During Frank’s gold medal run Tommy watched in rapt attention while bartending at the now defunct Brothers Four on Falmouth Heights.  A long-time runner himself, Tommy was so inspired by Frank that just one year later he welcomed 92 starters to the first Falmouth Road Race to raise funds for the Falmouth Girls Track Club.  By year three Tommy had lured his hero to Falmouth to take on growing local legend Bill Rodgers.

The Shorter vs. Rodgers rivalry on the Cape — Frank won in 1975 &`76, Bill took revenge in `77 & `78 — helped Falmouth become the Great American Road Race which assisted mightily in spreading the running Boom throughout the country.

“My heart is going a million miles an hour,” Tommy said when he saw the host of people stand and cheer at his arrival  last night. And from there it was one story after another recalling the life of a man whose passion for running and heart of gold has enriched the life of thousands upon thousands while elevating the sport of road running to heights few would have thought possible when he first began dreaming.

With friends from Boston’s old Eliot Lounge days; Falmouth, where Tommy now lives; Western Massachusetts, where he grew up, and all parts in between, the night was a celebration of all things Tommy.

Among the gifts bestowed were free lunches and dinners for life at several local eateries, a lifetime pass for seat number one on the Falmouth to Edgartown Ferry, signed bats and balls and a jacket from T.L.’s beloved St. Louis Cardinals, free haircuts (Tommy is hairless), and a bottle of Utopia, a 29 percent beer product brewed by Jim Koch, founder of Sam Adams Brewery, that is only available every other year and has won a number of blind taste tests versus top cognacs – the man obviously knows T.L quite well.

“The Cardinal jacket going in box with me, that’s for sure,” Tommy told the audience. “I have to sit back and recollect. I’m one lucky marine.”

Among those on hand were several members of the old Greater Boston Track Club who spent many a night at the Eliot Lounge: Randy Thomas, Bob Hodge, Mike Roche, Brad Hurst, Thom Gilligan, Dave McGillivray and Bob Barnaby.  (The GBTC will celebrate its 40th anniversary next Saturday Aug. 17th at Corcoran Commons on the B.C. campus).

Eddie Doyle, Tommy’s bartender pal at the Bull & Finch Pub on Charles Street that later became the Cheers bar of TV fame, told of another of Tommy’s classic brainstorms that, as usual, turned into an adventure into the absurd.

Seems Tommy wanted to stencil Bill Rodgers’ footprints along the Charles River every half mile as markers for the area runners.  But when Tommy failed to come up with Bill’s footprint, a classic Tommy execution outcome, Eddie said, “We’ll just use mine.”

So the two Irish bartenders spent the entire day and half the night stenciling Eddie Doyle’s footprints (as Bill Rodgers) along the Charles without every asking permission from anybody.

Litchfield, Connecticut’s Bill Neller and our evening’s emcee Brent “The Hawk” Hawkins, told of how T.L. helped his dear friend the late Boston Globe sportswriter Joe Concannon build a local race on the Falmouth model.  Tommy was even brought into Litchfield to close the deal with the board of selectmen. That night after the town meeting Tommy regaled the female writer from the Hartford Courant over drinks to expect 2000 runners.  The next morning Bill Neller got a call from the town’s first selectman after he read the story in the paper quoting Tommy’s prediction.  Seems the selectmen were under the impression that only 200 runners would be coming.

Fellow Eliot Lounge bartenders Doug Brown, Adam Sogoloff and Tommy Sullivan, who made up for most of the promises Tommy engineered over that famous maple bar on the corner of Mass Ave and Comm. Ave from 1972 to 1996,  told stories of Tommy Leonard’s legendary flights of fancy.  The stories just came pouring out.

On his own Tommy recalled his first trip into Boston from Springfield in 1948 to see his first major league baseball game at the old Braves Field at what is now Nickerson Field at Boston University.  Tommy drove in from Springfield with police officer Johnny Brooks and fireman Eddie Eagen.

“On the way home they stopped at every pub from Boston to Springfield,” Tommy recalled. “I drank enough coke to float the Queen Mary.”