Honolulu, Hawaii — We had surfed along the wave of technological advancement for so long that it became, along with rock `n` roll and fast food, a defining element of our Baby Boom generation. We grew up with pre-Michael Jackson moon walks, the Neil Armstrong kind, and the advent of Texas Instrument calculation over the analog slide rule means of computation. We were the cutting edge generation, the “teach your parents well” generation who easily identified with Peter Pan, because our perpetual youth had its bounty extended well into our adult years.

Imagine my surprise, then, when I got to the Outrigger Waikiki Hotel for this past weekend’s Hapalua, Hawaii’s Half Marathon, and discovered a lifetime of learning in need of sudden, irrevocable discard.

You see, the elevators at the hotel presented something new. The operations weren’t controlled by UP and DOWN selectors on the outside and FLOOR buttons on the inside. Instead, you had to hold your room key card along a surface pad outside, then punch in your floor. From there the pad told you which of the A, B, or C elevators would open for you to ride.  Once more the need for human input had been reduced as inside the elevator, there was no key pad whatsoever other than DOOR-OPEN, DOOR-CLOSE buttons.

Everyone seemed flummoxed by the new system, especially members of my generation.  But it was no more than a new security measure.  The old assumption was that anyone could use the elevators, bu that only hotel guests really would. Now that assumption has turned.  Today, we must insure that only the guests have access.  There has been a drawing in, a tightening.

“A lifetime of learning now instantly obsolete, ” I told more than one with a quizzical look on his or her face, “Well, one thing’s for sure, it is no longer about us.”

That is a harsh and humbling realization for the pig-in-the-python sized generation that came to define America’s power and allure, but unwittingly was also the beneficiary of an enormous leg up after WW2 when most of the world was still digging out of the ruins.

To us who had known no other way, we simply assumed it was the norm rather than an aberration, like when Frank Shorter and Bill Rodgers kept earning world number one rankings in the marathon throughout the 1970s.

Today we know better. The old freedoms have become the new securities.  When the rest of the world returned to full form, and Africa became liberated from colonial rule, the real balances of power resurfaced in sport. The world is in constant flux, and like a new Copernican theory, the thought that we no longer stand at the center of the universe seems quaintly illogical and just a bit hard to grasp for ones as solipsistic as we.

It’s a brave new world, and youth is, evidently, as fleeting as it’s ever been.  Now just hold your card key here. 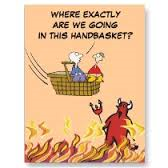 Speaking of Neil Armstrong. Remember when the standard by which all difficult tasks were judged was, “well, if we can send a man to the moon, why can’t we do X?”

So what do we do now that we can’t send a man to the moon anymore?  Does the entire slide rule calculation of difficult task management have to be recalibrated, too, be lowered? And how about the age-old worry that “the world’s going to hell in a handbasket,” which not being able to go the moon anymore is but one more example of?

Whenever I hear myself say that about our current state of affairs, I get the fear that I’ve turned into my grandmother. Except we aren’t totally sure hell even exists anymore (outside the U.S. highway and airport baggage carousel systems). And besides that, we don’t seem to be making as many handbaskets as we once did either. So I don’t know how we are supposed to get to hell anymore in the first place. Could be time for us to begin re-weaving.

Boston looms. Talk about your handbaskets.