Honolulu, HI. — The sport of marathoning  has gone gaga for fast times. Since 2011’s 2:03:38 by Patrick Makau in Berlin the record has tumbled  two more times, with the current clocking, 2:02:57, coming this September in Berlin by fellow Kenyan Dennis Kimetto.  The 100th fastest time of 2014, 2:08:25, is nine seconds faster than Aussie Derek Clayton’s 1969 world best in Antwerp that lasted a dozen years.

But Sunday’s 42nd Honolulu Marathon will not be won in anything approaching a world’s best, or for that matter, even what might be considered a normally fast, world-class time. No, Honolulu is a throw-back, built for competition, not for speed. The fact that six-time champion Jimmy Muindi’s course record, 2:11:12, has stood since 2004 — and before that Ibrahim Hussein’s 2:11:43 lasted 20 years — testifies to the difficulty presented by 26.2 miles (42.2Km) of tropical heat and humidity over a course that requires two climbs over iconic Diamond Head before the finish in Kapiolani Park. Now add a tempestuous NE wind that may clock in at 30 mph or more Sunday morning, and this 42Km may run more like 50!

Notwithstanding the challenges, this year’s Honolulu Marathon has what many are calling its strongest field ever, a well-matched compilation of veterans and eager newcomers anxious to show their wares and earn berth in a 2015 Abbot World Marathon Major.

Last year under 72F temps and calm winds the main nine-man pack loitered through a 1:11:38 first half, some three minutes behind front-runner Saeki Makino of Japan, a training partner of Japan’s famed citizen runner Yuki Kawauchi. It took till mile 22 before Kenyans Gilbert Chepkwony and 2011 champion Nicholas Chelimo reeled him in. Chepkwony then put Chelimo away with back-to-back 4:36 miles at 22 and 23 on his way to a modest 2:18:47 finish. Chepkwony and Chelimo have returned in 2014, but will be hard-pressed to maintain their positions atop the podium. It has always been said that the best way to honor your champion is to invite a field that’s worthy of his best efforts. You could say that race director Jon Cross is honoring the bejeesus out of Mr. Chepkwony this year.

When the 2014 pro field was escorted out to Waikiki Beach this past Thursday for a press photo shoot, none of the slender hard-bodies preparing for Sunday’s race embraced the outing more than Ethiopia’s Yemane Adhane. With this being his first visit to the United States — don’t get fooled, Yemane, Hawaii isn’t like any other part of the USA — the 29 year-old arrived on the islands with a resume packed with wins in Korea, The Netherlands, and Canada, as well as a fourth place finish at the 2009 IAAF World Championships in Berlin, just five seconds off the podium.

“I’d say he’s the strongest man on paper,” said Matt McCarren, a member of Yemane’s management team at Global Athletics out of Boston. “He runs fast. He wins races. Plus, he does well in different kinds of races.”

Though hardly an impartial source, Matt does possess a deep well of athletics’ knowledge. Besides, at 2:04:48 (Rotterdam 2012) Yemane has the fastest personal best in the field, and one of his two 2:06 marathon wins in 2014 came in Daegu, Korea on a windy course.

“I am in top shape,” said Yemane after the photo shoot. “I have been training for Honolulu since September. The weather is no problem for me.”

Training in Addis Ababa with some of Ethiopia’s top men, Yemane is probably the fastest marathoner you never heard of. Among his toughest challengers will be fellow Ethiopian Geb Abraha, who finished second to Yemane in Daegu in April 2014 after they put away two Kenyan challengers in the final kilometers. Abraha finished in 2:07:06 to Yemane’s 2:06:51. Yemane’s other 2:06 win this year came just seven weeks later in  late May in Ottowa at 2:06:54. But he has been loading up ever since for Honolulu.

Besides the two past champions Chepkwony and Chelimo, the top Kenyan star in Honolulu is three-time Amsterdam champion Wilson Chebet whose PR 2:05:27 (Rotterdam 2011) makes him the second fastest in the field. Chebet, you might recall, was the sinewy figure trying to run down Meb Keflezighi in April’s Boston Marathon, coming within six seconds of the gritty American before falling eleven-seconds short at the finish.

Chebet is the leader of the largest training group in Kenya, numbering some 150 strong in Eldoret. He comes to Honolulu  off a DNF at his favorite Amsterdam site in October.

“He just felt lethargic from the start,” explained his manager Zane Branson of International Athletics Consultancy. “The humidity was very high, and in the first 15K you could see he wasn’t running his normal style. It was just one of those days. He dropped out at 38Km.”

Trouble in high humidity isn’t a good sign for Honolulu. On top of which, Chebet’s wife and two year-old daughter had hoped to join him in Hawaii, but were unable to secure travel visas in Nairobi. Then  Wilson, Gilbert Chepkwony, Julius Arile, and Paul Lonyangata all went through travel hell on the long journey from the Central Highlands to the mid-pacific. They missed their connecting flight in San Francisco and had to spend the night, and didn’t arrive till Friday afternoon.

“But Kenyans are used to being inconvenienced,” said manager Branson. “They handle it well. They’ll get a good massage and rest. They will be ready for Sunday morning.”

Defending champion Ehitu Kiros of Ethiopia tops the women’s field. But she, too, will face stiff opposition. The big name in the field belongs to Kenya’s Joyce Chepkirui who recently copped the Commonwealth Games and African Championships 10,000 meter titles. The 2012 Olympian has been a terror on the roads with wins in Germany, The Netherlands, the Czech Republic and New York City (Healthy Kidney 10Km). She holds PRs of 66:18 in the half-marathon and 30:37 for 10Km. But she has only completed one marathon, London 2013 where she fell apart at the end to post a 2:35:54. She paced London the year before, then DNF’d in 2014. Honolulu is a chance to put a positive marathon experience under her belt before she returns to one of the spring majors in 2015.

“Honolulu is a great place to unwind,” said agen Branson whose IAC, along with Rosa and Associates, has brought the largest contingent of athletes to the islands. “It is hard to escape in Kenya. Joyce has the potential to be a 2:18 marathoner, but she has to do the work. She needs to be patient, go to the gym to do core work, get massages to avoid injury. She is a workhorse, but has some physical corrections she will have to address to reach her potential in the marathon.”

2004 Olympic 5000 meter silver medalist Isabella Ochichi is also on hand. This is her second visit to Honolulu in 2014. She came in April to run The Hapalua, Hawaii’s Half Marathon where she ran 1:10 in their unique Chase format. The former 5K road world record holder from Carlsbad 5000 in 2005 has a modest marathon PR of 2:31:38 from Amsterdam 2013.

Other contenders include 2012 Honolulu Marathon champion Valentina Galimova of Russia, who finished a close third in 2013 and also 2011; 2011 champion and 2012 & 2013 runner up Woynishet Girma of Ethiopia; eleven-time Croatian national champion Lisa Nemec (nee Stublic) whose PR 2:25:44 was set in Zurich 2013.  She is coming off a fourth place, 2:28:36 in August’s European Championships also in Zurich; Burundi’s two-time Olympian out of Flagstaff, Arizona Diane Nukuri who will be running her fourth marathon of 2014 Sunday. She took 12th in London, second in Mexico City in August and third in Amsterdam (PR 2:29:35) in October. And Kenya’s Sarah Kiptoo, Grandma’s Marathon course record holder from 2013 (2:26:31) who trains in Santa Fe, New Mexico with the AmeriKenyan Running Club.

The race kicks off at 5 a.m. Honolulu time, which is 7 a.m. Pacific, 9 a.m. Central, and 10 a.m. Eastern Standard time. There will be live radio coverage on KKNE, AM  940 with 1983 Boston Marathon champion Greg Meyer,  and Honolulu’s Dan Cooke at the anchor desk, me and Honolulu Marathon president Jim Barahal on the men’s lead vehicle, and debuting on the women’s lead vehicle our own Toya Reavis and former marathon world record holder Jacqueline Hansen.  Tune in and enjoy the weather. 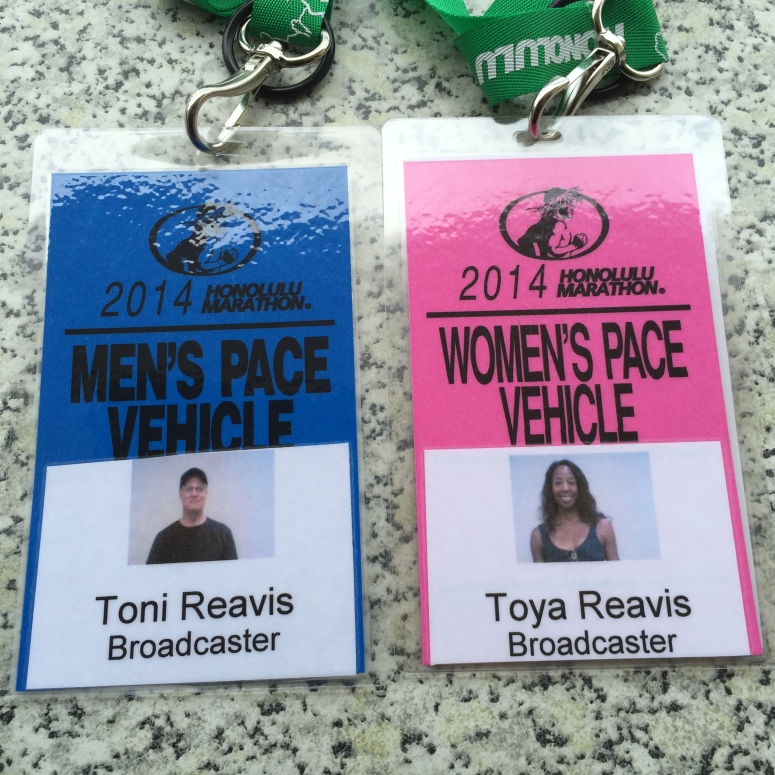