Following a 10 a.m. press conference at the Hyatt Hotel for the weekend’s Gold Coast Marathon, the entire crew loaded up for the ninety minute drive to Lamington National Park along the border of New South Wales.

Passing inland south from the Gold Coast of Queensland the countryside beyond became a tufted brown patchwork as rolling hills lifted the land with each passing mile.  All along the way idly grazing cattle dotted the properties around corrugated-roofed ranch houses outlined by shaded verandas. With little more than a squint one could easily imagine being back in the American Southwest at the turn of the 20th century.

Our destination was O’Reilly’s Rainforest Retreat at the top of the park, a three-generation business which anchored the area’s tourist economy. After a concluding thirty-six kilometer switchback ascent to O’Reilly’s, we arrived high atop the rainforest at an altitude of 7,000 feet.

Overhead the sun hung glazed amongst a formation of cumulus clouds with not a mote of pollution to filter the rays. Yet within the shade of the forest the air reminded us of the season at hand. 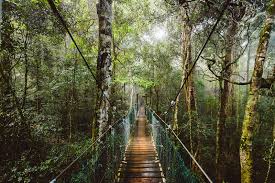 We bounded along Indiana Jones-like bridges stretched 50 feet above the brush. Through mesh-encircled ladders we climbed another twenty meters into the treetops, gazing over branches to a lawn of trees stretching to the Richmond Mountain range fifty kilometers to the horizon.

Birds of exploding blues, reds and greens passed close by as winter’s sun began to relinquish its hold, pushed by a rising moon covetous of the cool evening sky. Told of a lovely waterfall by a family of locals, we hustled to the van for the one kilometer drive down the road leading to it before the sun fully set. Once at the trail head American mile record holder Steve Scott and I lit out down the winding path.

The dense tree cover further chilled the light. Our pace met it head on, maintaining an even warmth as we wound down and through the arch of quadruple canopy. Behind came our crew: producer Rich Jayne, along with cameramen Dale Wong, Tom Wall, and Jim ?, equipment in tow, but falling behind the strong pace Steve was setting.  Like a shade being drawn, the darkness descended with each passing curve as fewer and fewer swatches of light managed to evade the enveloping cover.

After fifteen minutes we began to make out the slightest whisper of moving water in the distance to our left.

“Over here,” said Steve, stepping over fallen trunks lying covered in a downy moss. Another turn and we came to an overlook secured by a rusty iron rail. Out across the wide, deep chasm our gaze fell to a diaphanous veil of water caressing the canyon wall hundreds of feet away.

The sun behind cast a weak grainy light onto the far reaches of valley below. We watched in silence as the waters descended with a sigh, like a remembrance of a parted love, tumbling hundreds of feet to the valley floor. No rain had swelled the shallow stream sustaining the falls, and so the waters clung to the cliffs as if envious of the higher ground.

“Over to the other side,” said Steve, taking off once again.

Through the shadow land of greens and browns we could smell the evening’s approach.  We crossed the small stream feeding the fall as the sun fell to a bronzing hue, a light like fire from within a cave. Emerging onto an open space above the waterfall, we were offered a view stretching hundreds of feet straight down and tens of miles out into the darkened green forests of the canyon. The entire area formed an enormous horseshoe canyon.

Across the chasm we whistled loud into the falling sky toward the far slope which rose higher yet. Our shrill calls echoed like reminders of ourselves from a distant time. Beyond the far slope the edge of the canyon opened to the south. The sun had already dropped behind the western wall, it’s light painting deep bands of ocher and eggplant above the trees along the rim of the earth.

Rich and the boys spilled out of the path behind us, where they stood in silent awe of the view before them. The feeling in me was one of a time not yet born, or of a time long, long ago, of men traipsing through a dark and foreboding forest on a quest to save their king.

The majesty of the view more than was worth whatever lay ahead, for our return to the van would now have to be accomplished in utter darkness. It didn’t matter.  But before we began the return we took in the Southern Cross presenting itself in full display overhead. Fortunately, as we made our way gingerly through the darkened forest Dale had a small flashlight with which he flashed caterwauling shadows before us. Coupled with Steve’s almost animal-like night vision, we retraced our steps amongst low, overhanging branches, no more stumbling than in the full light of day.

We stopped at a small hotel at the base of the park for dinner and beers on our return to Surfer’s Paradise. It became a time to remember, a drop of silence when the fire burns low and stories once told linger in solitude, havens for moments of life recalled.