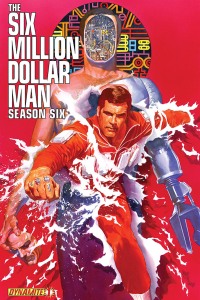 When is a man not a man?  Whoever thought that such a question might one day have currency?  We might have chuckled at the campy 1970s TV series The Six Million Dollar Man, starring Lee Majors, or chomped through several over-priced buttered popcorn boxes watching Arnold as the Terminator, but with technology rapidly replacing worn parts —  or, in the case of Caitlyn Jenner (nee Bruce), unwanted parts — we are fast reaching the point where man and machine may soon be indistinguishable, and ethics will once again be sorely tested.

Rules and regulations are instituted with the goal of establishing an even playing field whereupon fair competition can be conducted. How else to determine a true champion? But it is only when we all agree upon and adhere to those rules and regulations that such a goal can be achieved.  The minute there are competing interpretations is when we come into existential conflict.

Periodically, as today, there is a school of thought which throws up its hands, and in frustration declares, “just give in and let performance-enhancing drugs (PEDs) be allowed in sport.” After all, goes the argument, although there are health risks involved with PED use, by their nature sports are inherently risky, and PEDs would simply be another risk associated with participation. Plus, with medical supervision those risks would be largely eliminated.

And there is some logic behind that frustration and its corollary suggestion, as the best efforts of the testers have consistently lagged behind the users since PEDs came into wide spread use in the 1960s. But since there is not a clear boundary between “safe” and “unsafe” PED use, the line would only be shifted, not erased. So is it ever as simple as just turning the page?

In the end, by allowing even the monitored use of PEDs, all we would be doing is trading one set of rules, regulations and limitations for another. It isn’t much different than the minimalist shoe debate of recent years. There were advocates on both the minimalist and cushioned-shoe sides, with plenty of anecdotal evidence to support each side’s assumptions, but never a single correct answer. One end of any spectrum is rarely correct at the full expense of the other. As in politics, so in sport, there are pluses and minuses to each consideration, and often the answer is to be found somewhere in the middle.

Thus, if PEDs were allowed, it wouldn’t be long before a new set of questions followed in close order: “How much?”, “Of what?”, “Beginning at what age?”.  And so it goes until we’d be right back where we started with fuzzy lines of interpretation that all such limits create.

Having studied to be a teacher, and having grown up in a household with one, I found that whenever a new teacher walks into a classroom, the class instantly begins to assess where the line of authority would be drawn by that teacher for this class. It is an age-old dance, and the longer it takes the teacher to establish the line of allowable behavior, the pushier the class will become in order to draw that limit out.

In the same sense, rules and regulations evolve within a political system. The tripartite form of the U.S. government — with its checks and balances between and among executive, legislative and judicial branches — was an acknowledgement of this constantly shifting landscape. Recall that in the movie Chariots of Fire how Harold Abrahams simply hiring coach Sam Mussabini to improve his running technique was considered beyond the pale in the early 20th century’s Gentleman’s Agreement days of class-based athletic competition.

Today, in this global village where capital chases labor across old nation-state boundaries, the compacts that once bound and informed us are rapidly changing even as a fundamentalist backlash to that change has also erupted.

And so, in the face of the current controversy involving coach Alberto Salazar and the PED line dance which may or may not be going on at the Nike Oregon Project, and with the vote for a new IAAF president fast approaching, the question of whether the sport should consider redrawing the lines that govern it is also exigent. I would like to hear Messers Bubka and Coe open up more about this in a public forum.

But while rules can, do, and at times must change, human nature has proven to be fairly reliable. Irrespective of where new limits may be established, men will simply begin anew to challenge those limits. Better, then, to fight along the current battlefront rather than search for new devil to give his due.

7 thoughts on “TIME FOR A CHANGE?”