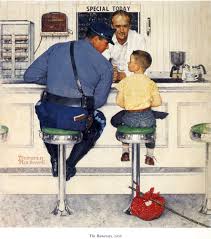 Are we surprised Donald Trump, Bernie Sanders, and Dr. Ben Carson are leading in the U.S. presidential polls? Are we shocked Pope Francis seems bent on radically reforming every Catholic prohibition heretofore considered canonical?  Are we indignant that women’s marathon world record holder Paula Radcliffe has been linked (though unnamed) to assertions of PED use by a British parliamentary committee during a hearing into doping allegations in athletics?

I wish I were, but I am sorry, I am not. I guess I have been around too long.

From Paula Radcliffe to Tom Brady, Hillary Clinton to the Catholic Church, what we are witnessing is the new assumption of guilt by a public grown too cynical for Norman Rockwell’s vanilla version of life. Nothing is above reproach. Facts may not lie, but like quarks are never directly observed or found in isolation, either. Instead they exist within the larger narrative that forms a constantly moving target that applies only to the moment, never universally over time.

“It depends on what the meaning of the word ‘is’ is,” don’t you know.

In the 21st century rectitude has been replaced by deceit, the wholesome by the expedient. In city after city the police, once protectors, have become the feared, and the religious, rather than ones who pray are seen as ones who prey. By the time we get to sports heroes, forget it.

Fair play is for chumps, not champs. Thus, politicians don’t solve problems, they win elections. And the church’s steadfast stance on marriage annulment or the forgiveness for the “sin” of abortion are just the latest two reforms ushered in by the Pope during his Year of Mercy. But mercy meant for whom? Perhaps the Church itself, as more and more Catholics reach escape velocity, is finding it hard to reconcile the venal and the cursed with the holy and humble.

Today, in the wake of Judge Richard Berman’s dismissal of Tom Brady’s four-game suspension in the Deflate-gate matter, ESPN The Magazine came out with an investigative piece that uncovers what it says was a much deeper spying regimen by the New England Patriots during their Spy-gate run of Super Bowl wins in the early 2000s — and a subsequent cover up by the NFL.

And England’s Paula Radcliffe was forced to release a defiant defense of her career in light of the veiled j’accuse leveled by a British Parliament’s select committee investigating allegations of wide spread PED use uncovered by Germany’s ARD TV and the Sunday Times.

But we have heard righteous indignation before, and been shown too many passed tests by too many people over too long a time. Nothing is what is seems anymore, even innocence. These days it is success, in and of itself, that draws skepticism. And once that skepticism has been roused, the damage is done.

This is the corrosive result of decades of lies and denials by the powerful and the privileged. Nobody believes anyone in authority anymore, and with good reason. The pillars of authority have crumbled, one by one, over the last 50 years.

“I am not a crook,” said Richard Nixon.

“I did not have sexual relations with that woman,” asserted William Jefferson Clinton.

And priests would never abuse their privileged positions over the innocents brought to their knee.  As such we are all victims of the moral climate we inhabit, and carriers of the sins of our fathers.

Today, an athlete who might once have been seen as the truest exemplar of their sport, someone like Paula Radcliffe, finds herself instead condemned by her times, if not by her deeds. And there is nowhere left to turn for absolution.

7 thoughts on “THE NEW AGE OF GUILT”