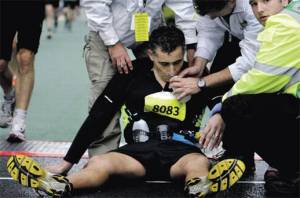 The lure of the marathon lies in the challenge offered by a long, grueling contest that offers no guarantees that you will complete the entire distance.  In the realm of politics the U.S. presidential campaign has been likened to the rigors a marathon for exactly the same uncertainty as to its outcome.

Certainly, no one has become a major party nominee, much less president of the United States, without going through a serious challenge.  And a thorough vetting of each candidate is absolutely necessary. But the endless campaign that is now being waged — as opposed to the roughly six-week sprint that it takes the British to select a new Prime Minister — all but guarantees not just a thorough vetting, but the eventual down-sizing (and at times evisceration) of every candidate who throws his/her hat into the ring.

This is politics in the United States in the age of media as entertainment, where the show, as opposed to the news, drives the entire enterprise.

Thus does the Political Industrial Complex spin politics into gold for consultants, pollsters, cable news networks, and a myriad other businesses that feed, clothe, clean and cover the campaign carnival while serving the public an ongoing narrative of wins and losses and disputed calls no different than the mirroring baseball, football and basketball seasons that fill the calendar.

The endless campaign churns out ad buys and fees, all which further necessitate manufactured controversy to maintain fresh story lines that power the ratings. All to the point where exhausted candidates eventually and invariably overstep, misspeak, and eff up until the public grows so tired and exasperated with each and every one of them, that by the time the “winner” finally emerges to deliver an inauguration address on the Capital steps, he/she is so diminished, disliked and distrusted that governance is all but impossible to achieve. And then the new off-year political cycle just picks right up from there.

This is our system? Indeed it is. And it is also why many who should, or might otherwise be running for high office are instead running as fast as they can from it.

President Dwight Eisenhower warned the nation of the Military-Industrial Complex upon leaving office in January 1961.  If only another departing president might have had the foresight to do the same for this just as damaging Political-Industrial Complex.  Would it have even made a difference, you think?

6 thoughts on “THE ENDLESS CAMPAIGN”