Father’s Day. Far as I know I never became one, but I sure had one to remember.

The pictures I cherish of Pop aren’t ones of forced or phony smiles. He’d seen too much. Been down too many hard roads.  By the time I came along his days of posing  had passed. Instead you caught him as he was, take it or leave it, made no difference to him. If you got a smile or laugh, all the better, but you had to earn it. And though he laughed easily with a contagious wheeze, a glare was all it took to freeze you.

Neither was he demonstrative in his affections when we were young. Yet never was there any doubt where his heart lie – hell, why else would he have gone off to work every day like clockwork without ever complaining or taking a day off?

One night when I was six or seven I stepped off my upper-deck bunk bed after dreaming that my sister was tickling my feet from below through a hole in my mattress.  When I couldn’t get her to stop, I decided to go tell Mom and Pop.

When he heard the dull thud coming from our room, Pop rushed in to find me unconscious on the floor. He called a doctor who lived up the block to come help. And when the guy refused, because “it’s the middle of the night”, Pop sped me to the hospital all the while devising a plan to kill the SOB.  And he’d killed a few in his time in war.

Maybe that’s the first thing to know about we Baby Boomers and our dads.  We grew up in a decidedly non-child-centric environment. We may have been the last of the “shut up, and sit down” generation, kids who were actually afraid of their parents, and with good cause. These were people who had grown up in a Great Depression, then fought in a World War. They had known hardship and made sacrifices. As such they had little interest in the prattling of a generation for whom much had been given and little asked, love us though they did.

Whenever any child talent came on one of the variety shows on television, Pop would get up and change the channel. No comment. Five minutes later he would change it back. We got the message

Though Pop wasn’t a born cynic, life had made one of him.  After the war he worked in the jewelry business, so from his vantage point, “Father’s Day, Mother’s Day, Tone, it’s all just marketing.”

We weren’t ‘friends’ with our parents as kids. I don’t recall Pop attending my sports games, though he did drive me to school when I was in fifth-grade and was first learning to be an altar boy for the nun’s mass at 5:30 a.m.  And we are talking about a Methodist here, not a Catholic. That’s the extra mile.

Friendship would come later in life after we had earned his respect through the accumulation of life experience, learning, and proficiency with a 3-iron.

I remember calling home one Thanksgiving when Mom and Pop were over at my sister’s place with her brood. By then the grand children were young, unmarried adults. Seems Pop had asked the assembled group to stop calling him ‘grandpa’.

“Anybody can be grandpa,” he had told them. “And it’s kind of an ugly word. Call me Isham. That’s my name.”

Of course, it immediately entered family lore, and always brought about vivid recollections of a true original. (Had anyone else ever referred to “grandpa” as an ugly word?)

Though he had been forced to drop out of the University of Nebraska when his own father died suddenly of a heart attack in the midst of the Depression, Pop was a lifelong autodidact, and great lover of books and literature, and such were often given and received as presents for birthdays and Christmas or just on a whim.

And though we three kids always knew he was there for us,  we also knew there wouldn’t be any hand-outs coming our way as both Mom and Pop preached a sermon of self-reliance. How often was I reminded when my grades slipped at school that “we won’t be able to leave you any inheritance, only the wherewithal to take care for yourself.”

“Tone,” he used to say whenever I asked him for money, “when we fly from the nest, we fly alone.”

And if I peppered him for advice on one thing or another, his response was always along the same pithy vein.

“Tone, we must all live our own lives.”

Yet it was Pop who lent me the funds to start my Runners Digest radio show in the 1970s, asking only that I help someone else out down the line as a means of repayment.

Making his children better people through example seemed to be his guiding principle. That he did it with style and elegance was just a bonus. 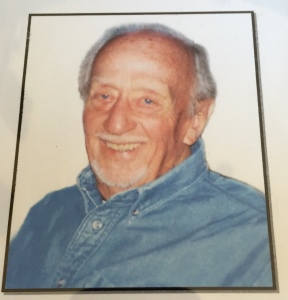 Pop lived a long, productive life, dying in 2010 at age 98. When he passed he did so with his tonsils, appendix and wisdom teeth, a pretty impressive trifecta of health. He also had about him his wits, knowing full well what age had extracted from his arsenal.  What would upset him most was the inability to quote Shakespeare from memory as he had once done with ease.

The Greatest Generation is all but passed now, and we Boomers have been left behind as what passes for elder statesman. Judging by the state of things (and the current choice for President) we have much left to accomplish to come within even spitting distance of those who came before us.

Yes, our fathers set the bar awfully high. Their times required that they lived a life of service. We can only hope we can honor that service in that which we do in the time we have remaining.

Thanks for it all, Pop. Thanks for my life and my time with you.