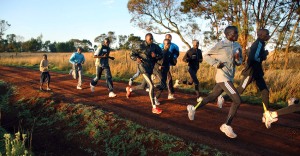 Take away that they have grown up at an altitude higher than the New York Yankees salary cap, and cut the air like six-inch stilettos, one reason the Kenyans and Ethiopians kick everyone’s butt in distance running is, well, what are their options?

Go to any East African village famous for producing championship runners and you’re not likely to find many arbitrageurs, or Bernie Madoff-like Ponzi schemers. And that just might be the corollary to why America has only intermittently produced world-class distance runners. We produce world-class most everything else. Something’s gotta give.

A post-industrial society is not distance running’s ideal seed bed. Here running is better suited to individual achievement and general fitness, while in an agrarian society, especially one formed at high altitude, running finds its most fecund soil.

You spend a few hours a day tending the animals and crops, walking high-country dirt roads for transportation, eating fresh, unpolluted food, and dreaming big dreams in the black night air of winning thousands of life-transforming dollars at races in far flung capitals – like every fourth fellow in the village seems to have done – and maybe running tops your to-do list tomorrow, too. By the same token, find yourself with an underwater mortgage working part-time on stuffed-crust pizzas, maybe your chances of fleetness have deteriorated a tad.

A mural on the side of a building in downtown Addis Ababa shows Haile Gebrselassie in full stride.  Ethiopia’s iconic runner and one of, if not the best ever has his motto alongside, “Anything is possible”, writ large in Amharic, one of the principle languages of the country. 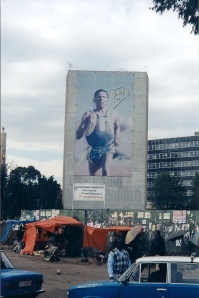 It is a motto for every child in east Africa to see. Whether true or not in a country where 14 million people are endangered by famine is another question, but to understand what motivates the children, and see why running is held in such high regard, all you need to do is drive a few kilometers out of Addis along the Sarris Road.

A two-lane affair hosting pedestrian amblings, traffic weavings, goats and cows gullying alongside untended heading toward some the mysterious domesticated animal place —  though a gentle toot is enough to guide them safely aside. After slaloming past a final stalled cow in the middle of the road, you arrive.

“It’s called St. Joseph’s Cemetery,” announced our friend Belay Welasha. “Where all the famous people of Ethiopia are buried.”

Turning in, every head stone is caged in reinforced steel rods.

“Why are all the headstones covered?”

“So the people will not steal the marble.”

And there, in the very center of the cemetery sits the grave of two-time Olympic marathon champion, Abebe Bikila, Africa’s original running hero, barefoot winner of the Olympic Marathon in Rome 1960 and again in Tokyo 1964, though this time shod.  A small plot of unkempt grass surrounded the bronze statue of the legendary runner, accented by a barbed-wire fence linked with the five Olympic rings.

It would be as if Frank Shorter would one day be laid to rest in the prime plot at Arlington National Cemetery. A few years later Ethiopia’s second great runner, Mamo Wolde, gold medal winner at the 1968 Mexico City Olympic Marathon, was accorded a similar honor with a memorial alongside Bikila.

“I will live in the palace one day”

After our return to town we stopped at the Ministry of Foreign Affairs across from the sparkling (then) new Sheraton Hotel. Our producer Rich Jayne headed inside to seek the release form to retrieve his video camera, which had been held up at customs upon our arrival at the airport. Mike, Belay, and I waited outside, sitting along the curb with our backs to a wall surrounding the ministry to avoid the warming sun.

From our shaded perch we watched as school children walked past in their uniform colors, books tucked neatly beneath crooked arms. Some wore red sweaters, others green, some blue, each to announce their particular school.

We looked up to see a young boy approach from the left out of the sun smoking a cigarette. His eyes were wide and alert.

“Are you in school?”

“A film director,” nodded Mike with a conspiratorial smile.

“Yes, and I am a business man, boyfriend, athlete,” rattled off young Engda flicking the ash off his cigarette. “I am all of these. You name it.”

A rail-thin boy who claimed to be 15, but who looked no more than 12, Engda was an urchin hustler living on his wits and little else. His eyes were sharp, searching, constantly angling for an edge, an opportunity. He wore tattered nylon pants, and a plastic Union Jack glued to a red headpiece – like a beanie. A dreamer, schemer, and charlatan rolled into one, wherever he was from, Engda was more fluent on Europe, America, and South America than one would expect. He spoke French, and his English came at a jackrabbit’s gait.

“I live in that mud hole down along the front of the ministry compound,” he informed us. “But I will live in the palace one day, and have many wives, too.”

As Mike and Engda continued, I noticed another very young boy lingering on our periphery pleading with his eyes. A ripped beige sweater clung to his bony frame; his toes cracked like worn leather. It was disquieting to see the level of poverty, the scope of the need. Unlike Engda, however, this youngster could never muster the courage to approach. Nor did I reach out.

After forty-five minutes Rich returned somewhat disconsolate from his meeting within the ministry.

“I talked with this guy who said, ‘There is no problem with what you ask’. But then he tells me that it wasn’t his decision to make. Said I had to go to the Ministry of Information and fill out some more forms there.”

Bidding adieu to master Engda, who went off in search of new fields to conquer, we piled back into Belay’s Opel for the short drive to the Ministry of Information. I could already tell that before it was all said and done, in order to get Rich’s camera back we were going to end up talking to (and perhaps paying off) the Minister of Lens Caps and Tripods.

Follow the fortunes of professional boxing in America, and you can trace the immigrant’s path to the middle class through the 20th century. Boxing, like running, is a bootstrap sport, requiring very little in the way of equipment, but a great deal of heart, dedication and belief.

In east Africa, where 90% of the population still pull a hard-scrabble existence from a bone-dry countryside, or like young Engda, scrape out a threadbare existence in a city beneath which lies no safety net, a middle class is non-existent. Instead, islands of extreme wealth float in a sea of want, and one of the very few modes available to the average citizen to reach one of those precious tiny islands is through distance running.

For a fortunate number, it is a route aided by a birth at high altitude, and the following wind of that same birth in a land where $500- $800 is the annual wage, and 50 years is considered a full life expectancy. Who wouldn’t choose to run from that?

15 thoughts on “THE CULTURE OF RUNNING IN EAST AFRICA”