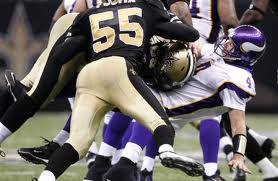 The NFL is now investigating the New Orleans Saints for paying bounties to teammates for injuring other team’s players. Some people, perhaps most, are horrified by the practice, but Friday Night Lights author Buzz Bizzinger is not among them.

“Is it barbaric? Yes. Is it terrifying? Yes. Is it sick? Yes. So what? I’ve said it before and I will say it again: That is why we watch football. Because it is barbaric and terrifying and sick. Because we love good hits and kamikaze safety blitzes and a quarterback sitting on the field after a sack with visions of Tweety Bird dancing in his brain.”

The corollary of which is why people don’t watch running.  As Buzz so rightly points out, we Americans love violence. But rather than commit violence on one another, running studiously avoids that while perpetuating what is essentially a self-torturing methodology of pure effort and internal combustion which, over time, convinces our self-flagellating opponents to forego their own suffering in the face of our steadfast willingness to absorb even more.

Which is why, as a TV guy, I have long suggested that if running wants to grow the SPORT rather than the ACTIVITY something like a “full-contact zone” should be instituted at regular intervals during races to appeal to our fellow American’s primary urge to rubber-neck at the gruesome disassembly of others.

After all, despite any protestations to the contrary, America is a nation of violence.  Look at any metric – gun violence that is 8X higher than any of our economic counterparts, a prison population that is, by far, the highest percentage of overall population in the world – and the chants of “We’re # 1” and “USA! USA!” comes ringing out across the plains and through the purple mountains. Violence is in our souls; we were birthed by it.  Look how basketball, an American-invented game officially designed and defined as “no-contact”, has morphed over the decades into human bumper-cars with periodic jump shots, but more satisfyingly, thunderous in-your-face dunks thrown in.

It’s not that running has no pain, there’s plenty of that.  But it’s all self-inflicted, and most damagingly, not evident or obvious. It just looks unpleasant, like a good swig of soured milk.  But as anyone who races hard can attest, it racks the guts and tortures the soul (which, I guess, soured milk might do just as well).  But it doesn’t spurt blood – unless there’s a good track or cross country spiking, and even then the wound is way down on the ankle or foot, not front and center on the eye or the lip.

If running would develop a 200-400m full-contact zone every 5K, we might have ourselves a watchable sport.  And if the shoe companies tossed in some incentives for causal DNFs, now we’re really talking.  All of a sudden the slender slivers from the running capitals of the world would find themselves in deep doo-doo if they let the marauders from the USA hang around long enough to be in reach when the first full-contact zone appears.  Imagine the damage a fully buffed Matt Tegenkamp or Chris Solinsky could inflict in a 5K? Even Galen Rupp looks like a strong safety compared to the slot receiver-sized guys he’s racing.

This format would force the smaller racers into early surges to avoid the fight, which might produce oxygen debt soon thereafter, thereby jeopardizing the subsequent zones of ill will.  Next thing you know, we’re on SportsCenter, and the kids start looking for autographs!

It’s bad enough that running is a game of delayed gratification trying to generate interest in a nation of ADHD over-achievers.  That it is also devoid of overt violence only makes the task of trying to make it cool that much more difficult.  Come on, guys, if a team called “The Saints” is tossing bounty money around, what the hell is wrong with us? Stop fighting it.

“Alright, there will be two commands, “Runners set”, and “Protect yourself at all times”.

5 thoughts on “BOUNTIES ON THE TRACK”