Race directors are notoriously competitive with one another, yet just as quick to lend a helping hand in times of trouble.  So when the conditions for Monday’s 116th Boston Marathon became fixed at red-flag levels by meteorologists, race directors on hand willingly stepped up to offer assistance in any way they could.  Chicago Marathon director Carey Pinkowski was especially forthcoming, having gone through a similar hot weather nightmare of his own in 2007 when he had to actually close the Chicago course after three hours when temperatures rose to dangerous levels, and medical contingencies, he feared, would be inadequate to handle the surge of potential patients.

In Boston this week, Pinkowski offered to fly in any extra equipment from Chicago that the Boston Athletic Association might need to address the severe weather ahead.

“That is true,” confirmed Boston Marathon race director Dave McGillivray.  “We didn’t end up needing it, but they were VERY GRACIOUS to offer.  We are all in this thing together.”

With ambient air temperatures actually higher in Boston 2004 than last Monday, there seemed to be something of a disconnect between the faster finishing times in `04, when the race was still staged at noon versus  Monday’s lower temperatures with its 10 a.m. start.

The key difference was clouds versus sun.  In 2004 the 83F starting temp in Hopkinton, Mass. was ameliorated to some degree by a high overcast. Monday’s 70F start temp was exacerbated by a bright yellow sun and open blue skies.  With cloudless conditions, the ground temperatures soared well into the 90s.  In fact, many of the pro runners complained that their special fluids and the regular water stops had warmed up considerably by the time they reached them.

Defending champion Geoffrey Mutai’s demise began when he missed his own fluid bottle at 25K and substituted a warm Gatorade drink in its place.  With the unfamiliar liquid sloshing around in his gut, he experienced stomach problems just as he was answering the surge of Matthew Kisorio and Levy Matebo as they began the push which separated them and Mutai from the pack.

By 30k Geoffrey was on the side of the road throwing up.  2011 had all gone so flawlessly for Mutai – wins and course records in Boston and NYC – perhaps we should have expected the marathon gods to exact a little pay-back in 2012.

Given there is no perfect mechanism for Olympic team selection, nations with an abundance of talent in a particular Olympic sport must instead choose the best selection mechanism available.  As we just saw this past Monday in Boston, a freak weather pattern can disrupt marathoners from the world-class to charity first timers.

There is nothing to learn from a marathon in 88-degree heat other than which athletes handle the oppression, and which can’t.  Accordingly, the job to select the Kenyan Olympic Marathon team for London 2012 -already a conundrum – has just become that much more imponderable.  The last race in the spring selection process is next Sunday in London where four men will try to go where both Moses Mosop in Rotterdam (3rd, 2:05:02), and Geoffrey Mutai in Boston (DNF) couldn’t.

Say what you will about the American single trials race process.  The one thing that cannot be argued is the fairness of it.  As my British broadcast colleague and one-time 4th place finisher in the Olympic 5000m, Tim Hutchings, wrote me today as we discussed the Boston outcome.

“It won’t be 30C in London that’s for sure; I guess a smart agent in such a situation, that is in Olympic year with Olympic selection at stake, will from here on insist on a contractual clause for his BIG names that allows withdrawal if the race conditions are truly crippling to performance, e.g. like Boston on Monday or Chicago a couple of years ago. Those guys could just have had the biggest race in their careers (London 2012) snatched away from them – when they could have done any one of half a dozen other marathons in the next month. Tough one.” 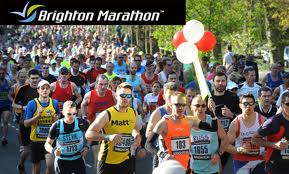 As usual, Tim has his finger on the pulse of the sport.  Congrats to him and his team from The Ground Events Company for their successful staging of the third annual Brighton Marathon last Sunday.  Begun to meet the market spill-over from the London Marathon, Tim’s timely event has taken off nicely.

“We were blessed with sun, slight winds but record 9000+ starters, massive crowds and a great deal to be happy about.  Yet exactly 48 yours after my race, we woke to a storm with very cold temperatures, high winds and heavy rain. If it had been race day, we’d have had to cancel the race! But by 10am (our race starts at 9am) it was sunny with strong winds – and racing would have been feasible! If we’d been in the situation where we had to cancel it, and then had sunshine several hours later, we’d not have been popular! Thank goodness the good Lord was smiling on us!”

Kenya’s Peter Some lopped over four minutes off the old Brighton course record with his 2:12:03, while Belarus’s Sviatlana Kouhan slashed five minutes off the previous women’s mark in a handy 2:29:37.

Not surprisingly, Douglass fashioned his 10 mile race around the popular Rock `n` Roll format that he helped Tim Murphy pioneer at Elite Racing before that brand was sold to Falconhead Capital in late 2007 to become The Competitor Group.  The 10 mile distance was inspired by another of Elite Racing’s events, the Carlsbad 5000, which was considered an off-distance when it was first run in 1986.  Now the 5K is the most popular road race distance. Douglass hopes the 10 miler will follow in the 5ks footsteps.  The band Everclear performed during the after-race celebration.

As for the racing, the Austin 10/20 offered significant bonuses to record-setting finishers in the inaugural road race, but Kenya’s Linus Chumba, the men’s champion (48:31), and Ethiopia’s Misiker Mekonnen, the women’s champion (55:41), fell well short of any marks as the 8000+ entrants ran in what turned out to be challenging conditions.

“We had a lot of wind,” said Peter.  “We couldn’t put up any start or finish line banners. There were 20-30 mph winds, so we couldn’t put up any branding, unfortunately. But at least it was dry during the race. But a severe storm blew in just as Everclear was finishing the post-race concert.”

Notwithstanding, Austin 10/20 was a major success, as Douglass claims he is already speaking to a second city ready t0 stage another music-based 10 miler next year.

“The (20) course bands were spectacular.  There was one every half-mile. And we’ll be opening registration for next year’s race in 10 days.  We got hundreds of positive comments, and people are already talking about having registration parties. This 10 mile concept is going to take off.”

Less we forget, this whole road race proposition is a constant crap shoot. Why anyone would want to be a race director is beyond my comprehension. But thank god so many do.