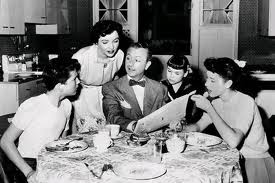 It is a long-lost tradition in these frenetic, more individualized times, but in days of yore families came together to eat dinner as a unit.  In our house it was a time to discuss the issues of the day, learn the manners of the table, and generally upset Mom and Pop for the remainder of the evening — although that was more a by-product of the first two than a specific goal in itself.

By family I mean in the extended sense, our dogs were also at hand (and underfoot).  And as anyone who grew up with dogs in the house can testify, in general parents treated pets better than they did the children, although more times than not they would leave the estate to the bipeds.

In our household dogs could do anything, while we, the children, could do very little.  And please don’t think this is some rose-colored remembrance.  We were an eclectic family when it came to pets: birds, squirrels, turtles, fish, we co-habitated with each at one time or another.  No cats, though.  But always and primarily dogs,  plural.  One great dane and two dachshunds, that was the standard issue.  Do not ask why; these things evolve.  While the other pets were always treated well, in no way were they in the same class as the dogs, which assumed a status similar to that accorded cats in ancient Egypt.

Dinner was a time when this distinction in treatment was particularly acute.  The dachsies, like many canines, had a difficult time regulating food intake.  Put food in front of them in any quantity, and they would scarf it up no matter if it outweighed them by a factor of three.  In that sense I always thought of cats as a faith-based species, perfectly able to leave their food unattended, with faith enough that it would still be around when next they sought it.  Dogs, on the other paw, seemed to be natural atheists, as they took no heed of, nor faith in the future whatsoever.  One of our dachshunds, Priscilla, required special attention.

As we gathered at the family table, Mom would distribute the three dogs’ bowls around the kitchen to maintain a clear territorial imperative.  But despite her best attempt to keep everyone’s food safe from intrusion, before we could even finish passing the lima beans, the sound of gagging could be heard coming from Priscilla’s area by the back door. Of course, that could just as easily have been me trying to gag down those lima beans.

In any case, “Oh, goodness,” Pop would exclaim as he pushed back his chair before kneeling to lift her little body so he could press her spine along his shinbone. Thus positioned he would begin performing little doggy Heimlich Maneuvers until the saliva-soaked kibble would pop out across the room.  At that moment the other two dogs would scurry in chase hoping to ingest the sodden nugget as Priscilla began wriggling and whining as she tried to get away from Dr. Pop so she could take back what had, not a moment before, been hers.

For us children this activity was a welcome distraction, for it drew both Mom’s and Pop’s attention just long enough for me to gather my remaining lima beans and hurriedly stuff them  into my pants pocket — even though I knew that an offending stain would later exact severe punishment.

But of course Mom, who monitored our eating like a mother eagle, would tell me to eat my lima beans or have them shoved down my throat. The irony, of course, was there was Pop performing doggy Heimlichs while Mom was threatening to treat me in a fashion which will require Pop to Heimlich me.

All the while across the table younger brother Marek was perfecting his one true seven year-old talent, that of partially swallowing a well-selected lima bean and somehow making it come out his nose.  This after Mom (and a reintroduced Pop) had imposed a no-laughing-at-the-table order, which was now all but impossible to uphold with Marek across the table tilting his head back and blowing out a Green Giant buttered lima bean when the parent’s heads were averted.  Sort of like telling young boys not to laugh when someone farts in church.

And we wonder why families don’t eat meals together anymore.