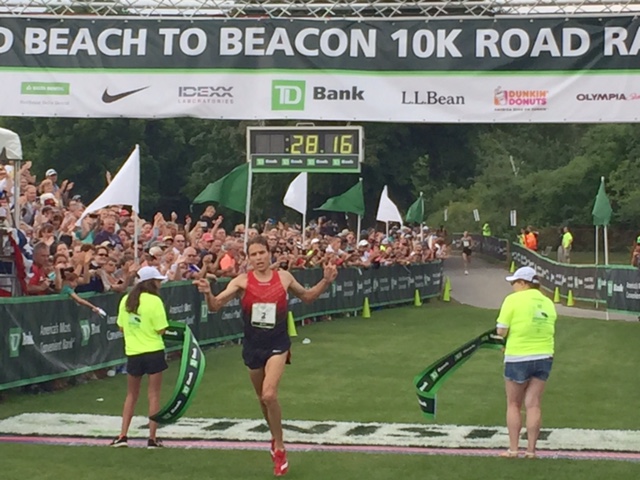 Over the event’s previous 18 years, 15 Kenyans, one South African, one Moroccan and one Ethiopian had turned the trick, and True himself had finished third two years ago. But this year in the event founded by Cape Elizabeth native and 1984 Olympic Marathon champion Joan Samuelson, True took the measure of the entire field. His winning time 28:16 bested American marathon star Ritzenhein by 11 second with 22 year old Kenyan Sitonik taking third in 28:31.

“It was great to get the win here in Maine,” said True surrounded by a press scrum. “But I’ll admit it’s bittersweet.”

Picked to earn a berth on the Olympic 5000 meter team, True came up  a half-second short in Eugene, Oregon last month finishing fifth in the Trials final. He then loaded up his frustration, returned to his native Maine, and took it out on his opponents today with a final push that sealed the historic win.

“In the last mile the three of us were going back-and-forth,” said runner-up Dathan Ritzenhein of Michigan. “Then coming to the second last hill before the Fort (Williams), Ben took off. There was one last hurrah before that last hill where Ben finally pulled away.”

Ritz took charge after a desultory 4:51 opening mile in the high humidity. Then following. 4;37 and 4:28 that featured a True test, Sitonik went to the front with a 4:26 4th mile breaking the oack down to five, with Trials 5000 4th placer Eric Jenkins, Ritz, 2015 BAA Half-Marathon champion Daniel Salel, 2011 & 2013 B2B champ Micah Kogo and True in contention.

True, Kogo and Salel had  experience on the course. But this is a what-have-you-done-for-me lately sport. And with his 26;54 10,000 in May the young Sitonik had the most firepower in hand. 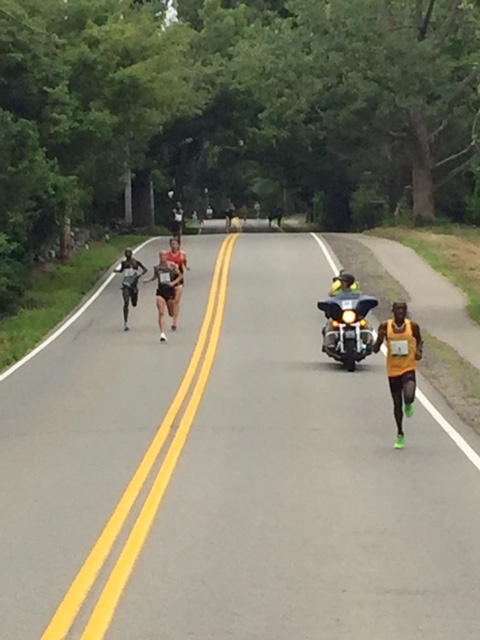 Between 3 1/2 and five miles Sitonik pressed the accelerator opening a three second advantage on Ritz, True, and Salel as Micah Kogo the 2008 Olympic bronze medalist at 10,000m dropped away. Understandable as B2B was his first race since a fourth place finish at the Paris Marathon in April. He wasn’t race sharp and it showed.

The tiny Sitonik, who trains off and on between his home in Kenya and Japan where he runs for Honda, finished fourth at the Kenyan Trials 10,000 on July 1. But when it counted, he showed his road inexperience – this was his first ever road race.

Swinging wide to the outside curve of the road just before five miles to grab a cup of water, Sitonik allowed Ritz and True to eat into his lead dramatically by doing nothing more than running the inside tangent. Then, once more in contact, the three battled for the win over the final mile.

In the Women’s race Kenya’s Mary Keitany continued on her U.S. rod rampage, breaking countrywoman Lineth Chepkirui’s 2010 course recor by 14 seconds in 30:45. Defending champion Wude Ayalew of Ethiopia finished second in 31:39, nearly a full minute behind. It was the second straight week Mary took down a long-standing US road record. Seven days ago in Davenport, Iowa the diminutive Kenyan broke a 12-year-old course record at the Quad City Times Bix 7 Road Race. And it’s a tough double as both the Bix course is a bruiser, and Beach to Beacon rolls.

“At 5 miles somebody said you could get the course record,” said Mary, “but it was not on my mind before then. But I said let me push.”

The 2x defending New York City Marathon champion had already established a winning margin after passing under the big American flag hanging over the course at 3 1/2 miles. Until then defending champion Wude Ayalew was still holding close with Bix 7 runner-up from last week Caroline Chepkoech in third place.

Heading the American women’s field was Emily Sisson from Providence, Rhode Island, the 2015 NCAA 5000m champion. She finished strong in fourth place, but needed medical attention briefly afterwards. Six of the top 10 women finishers came from the United States. Seven of the top 10 men were American. There was a $23,000 American purse with $5000 going to the first Yanks across. $90,000 in total prize money.

Three-time US Olympian at 10,000m Craig Virgin was here from Illinois at the invitation of race founder Joan Samuelson. In discussing the race with Craig we couldn’t think the last time two American men went 1-2 at a major American road race. Maybe back in the early 1980s.

What is certain is the resurrection of American distance running continues at pace here in the summer of 2016. Now it’s on to Rio with hopes the trend continues. Ben True will be there, too, but only to support his triathlete wife Sarah all the while hoping he’ll have another chance himself come 2020.