The marathon world is in the middle of a technological revolution these days, witnessing a new era of high performance. It will be interesting see if that revolution continues on the streets of New York City on November 3, 2019.

The revolution isn’t just coming from the ground up via the stacked midsole, carbon-plated shoes that have tongues wagging and federations investigating. Another developing change in the marathon world has been in the athletes’ total focus. Many men like world record holder Eliud Kipchoge and second all-time Kenenisa Bekele no longer do a tune up race at all before their marathons, while those that do are running them much faster than their predecessors.

For instance, last year Shura Kitata ran 59:16 in Philadelphia as part of his NYC buildup. That prepped him for a second place finish in NYC in 2:06:01 behind training partner Lelisa Desisa’s 2:05:59 win.

Back in the day it was rare for anyone to even break 61 in their half tune up for fear they would find themselves too sharp for the more conservative pace required in the double distance. Now that theory is another that seems to have been tossed into the dust bin of history.

So far in this year of 2019, of the top 10 performers in the marathon, only one ran a tune up race. Mosinet Geremew won the Lisbon Half Marathon on March 17th In 59:37 before taking second at the London Marathon six weeks later in 2:02:55 behind Eliud Kipchoge’s no tune up 2:02:37.

Mule Wasihun finished right behind Geremew in London in 2:03:16, and did run sixth in the RAK Half Marathon on February 8th. But 11 weeks between half and full is a bit of a stretch to consider RAK a tune up for London.

For comparison, 10 years ago in 2009, the top four  marathon times of the year were all preceded by half marathon tune ups, each between 60:24 and 62:21, very traditional times for back then. 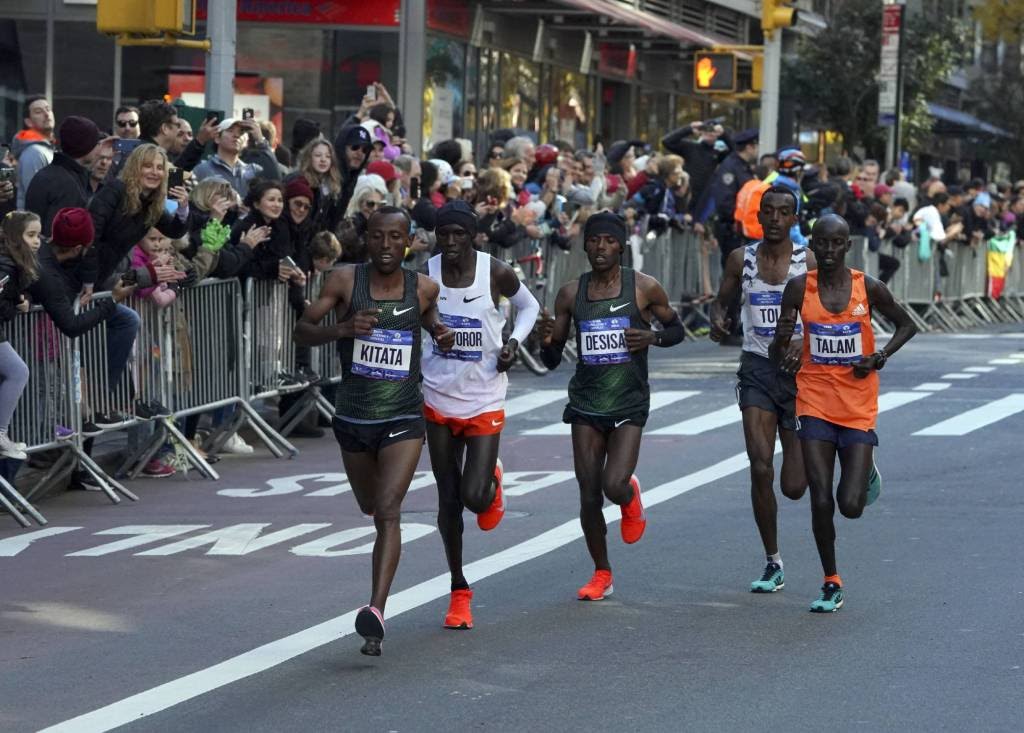 In NYC 2019, the top four finishers from 2018 have all returned and if form and the weather holds (always a big IF) they will contend for the title once again as no other athlete in the field has a sub-2:08 performance in his career to date. In fact,  that’s a third change. With a significantly more cluttered calendar of events to choose from and reduced budgets for elite athletes, even the majors have much thinner elite fields than in years before.

Notwithstanding, it will be particularly interesting to see the daring double attempted by defending champion Lelisa Desisa. It’s one thing to do a tune up half-marathon four to six weeks out, but just 28 days separates NYC from the Ethiopian’s 2:10:40 gold medal run in the heat of Doha at the World Championships Marathon!

In 2004, Meb Keflezighi ran second in the Athens Games then second again in New York City 70 days later. But less than 30 days?  It will be a testament to the man (and his shoes) if he’s able to stack another World Marathon Majors performance atop a World Championship gold medal run. Though he’s no time trialer, Desisa is as rugged a street fighter as you’ll ever rub up against, willing to give or take with anyone.

Plus, if the new stacked midsole, carbon-plated shoes reduce muscle fatigue to the degree they are said to in a race, shouldn’t they reduce the down time between races, too? Desisa’s race will give us a good indicator on that front.

While last year’s runner up and Desisa stablemate Shura Kitata abstained from a tune up race in 2019, the other two NYC Fab Four of 2019, Tamirat Tola, and Geoffrey Kamworor, both ran notable prep races.

Tola took a more traditional approach, running a strong 59:13 to take second at the Great North Run On September 8th.  Kamworor put one waaaayyy out there with his World Record 58:01 one week later in Copenhagen.