On the sixth anniversary of his passing, a chance to remember a fallen hero whose memory won’t fade no matter the time. 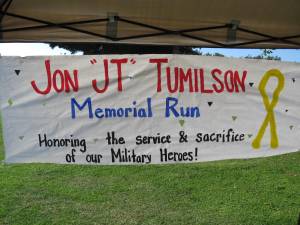 San Diego’s Mission Bay Park is the training ground for many of the area’s fitness enthusiasts and serious competitors alike. In 2008 and again in 2011 its lush green lawns hosted the USATF National Cross Country Championships.  But thoughts of speed and championship performances were not on the minds, nor in the hearts, of the hundreds of people who came to the park last night.  Instead, as deepening summer shadows cut through the velvety green, San Diego’s running and triathlon communities gathered to bid farewell to one of their own.

35 year-old Petty Officer 1st class Jon Tumilson had run along Mission Bay Park hundreds of times in the years he was stationed in San Diego as a Navy Seal.  And though he transferred to Virginia Beach in April 2009 to join fabled SEAL Team 6, the native of Rockford, Iowa kept his connections to America’s Finest City strong and vibrant.

JT on the Run

One thought on “FAREWELL TO A MAN OF ARMS”